The topic of firearm ammunition is wide-reaching and filled with opinions about all different types of ammo. Most of a gun owner’s opinions on ammunition come from the practitioner’s experience of target shooting. And, there is a difference between target ammunition for the gun range and defensive ammunition.

Learn everything you need to know about the different types of ammo you shoot during target practice and defensively. Find out which ammunition is the most common for target shooting, and why defensive ammunition is not typical to shoot at the range. And, see how to save money on target shooting ammunition the next time you go to the gun range.

Types of Ammo for Shooting at the Gun Range: Complete Guide – 2021

There are many different types of ammo for firearms, but they can generally be distinguished between target and defensive ammunition. One of the learning curves for some new shooters is understanding the differences in ammunition, and which types are for what purposes. A common mistake of new shooters is bringing defensive ammo to the gun range – which is an expensive mistake.

When you go to the gun range, the point is to practice, and that means shooting a lot of ammunition. You wouldn’t bring a box of new Callaway golf balls to hit at a driving range – and you don’t use heavy-duty ammunition for target practice. Instead, target ammo is more affordable to use in bulk for target practice.

What is Target Ammunition?

Target ammunition is low-cost as compared to its defensive counterpart, and it is specially manufactured for target range shooting. Target ammo is Full Metal Jacket (FMJ), whereas defensive ammo is often constructed as a Jacketed Hollow Point (JHP). FMJ ammunition is designed to penetrate straight through a target, producing a clean entry and exit point.

FMJ ammunition has a higher penetration point, so it travels further into and through the target while causing minimal impact to the area surrounding the bullet’s trajectory. When shooting at the range, you don’t want to use ammunition that causes a whole bunch of damage to the surrounding area of the impact, since that would destroy the targets faster. And, it is more difficult to tell where the exact entry point is when target shooting with ammunition that expands upon impact.

What is Defensive Ammunition?

Defensive ammunition is designed to inflict as much damage as possible to the target, which is exactly what JHP ammo does. Unlike FMJ ammo, JHP ammo is designed to expand upon impact with a target, which causes extensive damage to the surrounding area. FMJ bullets move at a higher velocity than that of defensive ammunition, and the behavior of the bullet slightly differs.

So, it is important to get some practice shooting defensive ammunition since it is likely the type of ammunition you would prefer in a real-life defensive situation. But, it isn’t necessary for general target shooting at the local shooting range.

Is it Safe to Use Target Ammo in a Real-Life Situation?

The reason you shouldn’t shoot off too much defensive ammunition at the range is that it is an expensive way to get target practice. And, on the other hand, using target ammunition in a real-life situation might not be a safe or legal option. Since FMJ ammunition penetrates cleanly through a target, you cannot be sure that the area behind your target is clear.

FMJ ammunition can exit your target and keep traveling with the potential of striking an unintentional target. Defensive ammunition is meant to slow down and stop moving within the target upon impact, which has the more stopping power to your target while limiting the potential for collateral damage.

Get Help Choosing the Right Ammunition for the Shooting Range

Knowing how to safely use your firearm is essential, and the professional firearms instructors at AimHi Family Firearms Center help shooters of every skill level choose the right type of ammunition for the range. Our instructors help shooters of all ages learn the correct way to load, unload, fire, and holster a gun. Talk to an AimHi associate to learn more about the best types of ammo to bring for your next day at the shooting range. 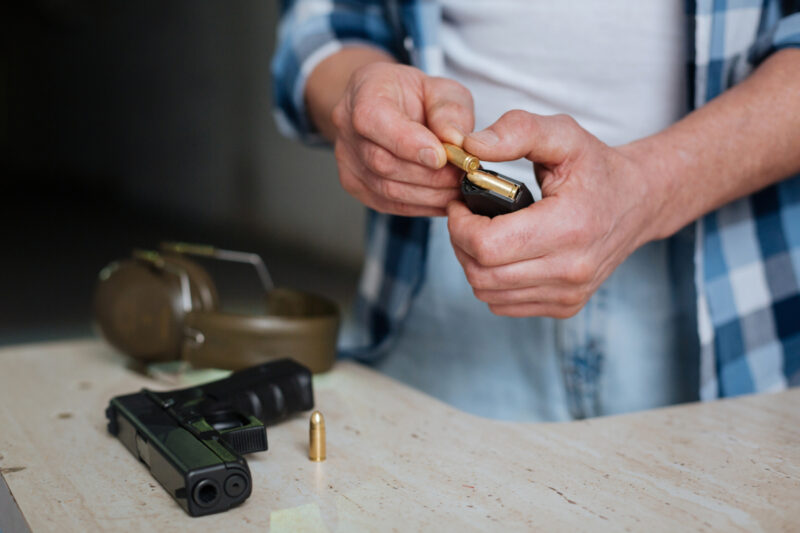