Different types of shotguns are designed for specific uses, like hunting, home defense, or target shooting. Shotguns are the preferred firearm for many hunters, as well as for personal home protection. Depending on the type of shotgun, you can add a wide variety of upgrades and modifications to customize your firearm for your preferred shooting style.

Learn everything you need to know about the basic types of hunting and home defense shotguns available. Find out why certain types are better for specific uses, and which is best for your needs. And, learn about the historical context of shotguns and how they have evolved.

All different types of shotguns originally derive from the early short-range scattergun. The original use of a scattergun was for hunting game, from pigeons and whitetail deer to larger game like bears. Even from their inception, shotguns are designed to accommodate a wide range of ammunition, to cater to a wide range of game.

Shotguns found their way to becoming the standard firearm for shooting clays. And, of course, it wasn’t long until shotguns were recognized for their self-defense merit. Today, shotguns remain the preferred firearms for hunting and skeet shooting, as well as have gained a substantial foothold in the home-defense market.

What is a Shotgun and How Does it Work?

A shotgun fires ammunition called a slug, which ejects a spray of multiple lead pellets. Unlike a rifle’s barrel, shotguns have a smooth bore to accommodate a range of pellet sizes. Shotguns provide a different benefit than that of a rifle, in that they increase a shooter’s kill-zone by emitting a spread of projectiles, instead of a single bullet.

This feature makes shotguns more effective for hunting birds, ducks, and other fast-moving game. Today, a ‘slug gun’ is a shotgun with a rifled spiral barrel for better range and accuracy, but only can fire a sabot slug. But, the main distinguishing factor between different types of shotguns is the type of action.

When you hear the “action” of a gun being referenced, it means the operational design of the gun. How a shotgun loads, fires, and ejects a spent cartridge is the action of the shotgun. And, there are three types of shotgun actions that serve as the primary feature to delineate one type of shotgun from another.

Break action shotguns only hold one or two shots at a time, before you have to reload. In a home defense situation, it is reasonable to imagine a scenario in which you might want a weapon that holds more ammunition. But, that being said, a break action shotgun leaves nothing to be desired in stopping-power.

Pump or Slide Action Shotgun – Most Reliable and Intimidating to Intruders

Slide action or pump shotguns were invented around the turn of the century and were intended for military battle. The pump shotgun is the most reliable type of shotgun you can find and has many benefits for anyone looking for a home defense firearm. The most distinctive aspect of a pump-action shotgun is the sound it makes.

A slide action shotgun is so-named for how the shooter cycles a round into the chamber. The slide sits underneath the shotgun barrel and ejects a cartridge each time it is pumped laterally, along the barrel. It manually reloads a fresh slug into the chamber, while ejecting the used slug, making it resistant to jamming or malfunctioning.

Pump-action shotguns hold multiple slugs, giving you around 5-shots before you have to reload. When racking a shell, or pumping the action, the gun makes a sound that stops any home intruder dead in their tracks. When an intruder hears the “chook-chook” of you raking a pump-action shotgun, there is a good chance that the last thing they want is to hear what it sounds like when you pull the trigger.

A semi-automatic shotgun is the type of shotgun with the highest fire-rate on the civilian market. A semi-auto shotgun is the standard type used for competitive skeet and target shooting. It fires a slug as fast as you can pull the trigger and usually holds around 5 to 7 rounds. It cycles spent and new rounds in a similar way as pump-action, but you don’t have to manually rack the gun.

Instead, semi-auto shotguns use the residual energy and gasses to automatically cycle the round, each time you pull the trigger. Semi-automatic shotguns also have less recoil than other types, but you often have to spend more time cleaning the firearm after each use if you want to keep it reliable and in working order. But, cleaning aside, semi-auto shotguns are the most popular type of shotgun for home defense because of the increased fire rate, accuracy, and capacity.

Never use a firearm in self-defense if you are an inexperienced shooter. Part of protecting your home is becoming experienced with whichever weapon you choose to use. Talk to a firearms specialist about becoming familiar with all types of shotguns for home defense on the range and through firearms training courses. 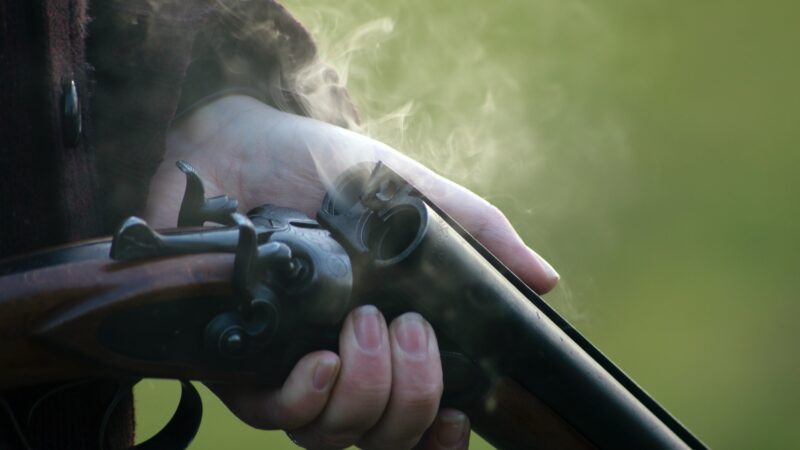